The oppression of Muslims in present-day India, and increasingly in diaspora countries such as the Netherlands, is justified by historical arguments. One of the most common claims is that the Mughals invaded India and oppressed the Hindus for centuries. This statement assumes that the entire population was Hindu and that the Mughals were all Muslims. This simplifies a complex historical phenomenon into a religious contradiction: Hindus versus Muslims. Much contemporary hostility towards Indian Muslims finds its justification in this claim. It is a historical indictment that evokes considerably more emotions than, for example, the domination of India by the English. This difference between the English and the Mughals alone shows that it is not about political and military domination, but about a religious contradiction.

Who were the Mughals? The Mughals were a collection of culturally related clans in the north of present-day Pakistan and India that descended from the Mughals in central Asia and from Turkish tribes. They also had Arabic and Persian roots. So they were a collection of different peoples. In the 13th and 14th centuries, long before Columbus supposedly discovered America, they besieged territories in Asia and also in present-day India. The Mughal Empire was officially established by Babur who was the ruler for a short time from 1526 to 1530. The Mughal Empire formally lasted from the 16th to the beginning of the 18th century, so about two and a half centuries, but it is worth emphasizing that the empire slowly expanded in different epochs. That is clearly visible on the map below. 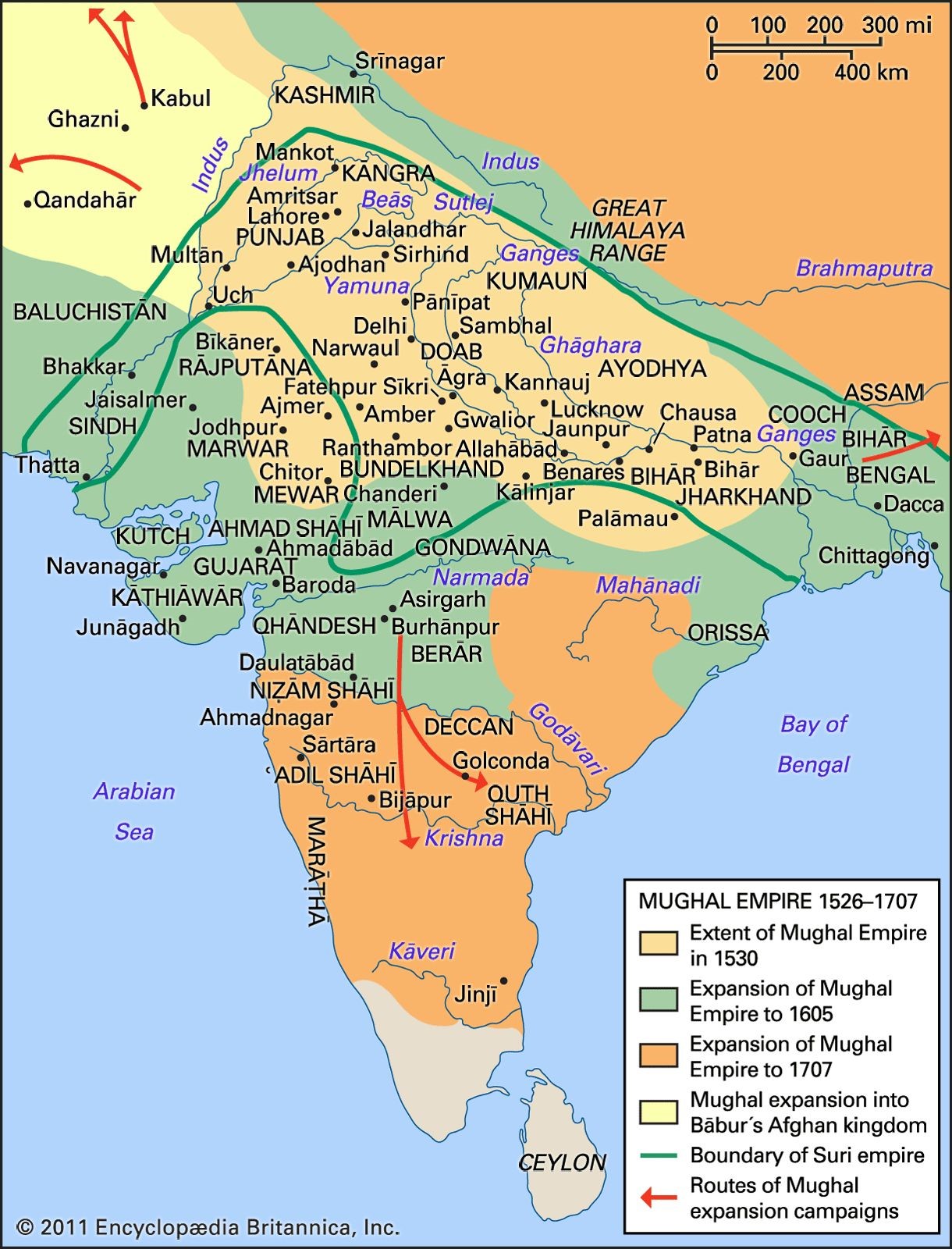 Pay attention to the boundaries of the empire. It lays in the northwest, present-day Afghanistan, although to the east, towards Bangladesh, the military and cultural occupation was meager. The center was Kabul for a long time, but from the perspective of present-day India, the Mughal story is a central and northern Indian story. There we also see most of the heritage of this civilization. From the beginning of the 18th century, the empire began to crumble. This had numerous internal causes, but the increasing influence of the English was also decisive for the fall.

According to the Hindutva story, the Mughals were a foreign power that invaded sovereign India, conquered it militarily, and oppressed it administratively and culturally. The premise here is that India at that time consisted only of Hindus and the military invasion of the Mughals was an Islamic operation. A simple representation of two religious camps that were politically and militarily opposed to each other. This representation has three inaccuracies.

First, India as we know it today did not exist then. Today’s India only came into being in 1947 during the independence in which Pakistan and Bangladesh (then called East Pakistan) separated from British India. Previously, British India consisted of a multitude of tribes, ethnic communities and peoples who differed greatly from each other in terms of economy, form of government, language, religion, traditions, customs and habits and sometimes possessed great autonomy. These communities were relatively closed at the time and did not have much contact with each other, partly because roads and bridges were hardly present or poorly developed. The size of the population was also different. For example, authoritative sources estimate the population in 1600 at 130 million. But other sources (such as Deer in his two-volume A History of Sugar) mention the same number for the year 1800. Be that as it may, the density of the population was much lower, the population was much more diverse and isolated from each other. The Mughal Empire thus consisted of a patchwork of communities, some of which were very autonomous, which also waged war among themselves and committed brutal massacres.

British India was forged by the English colonizer. The map below shows an important difference between the Mughal Empire (see above) and the British Empire (see below). 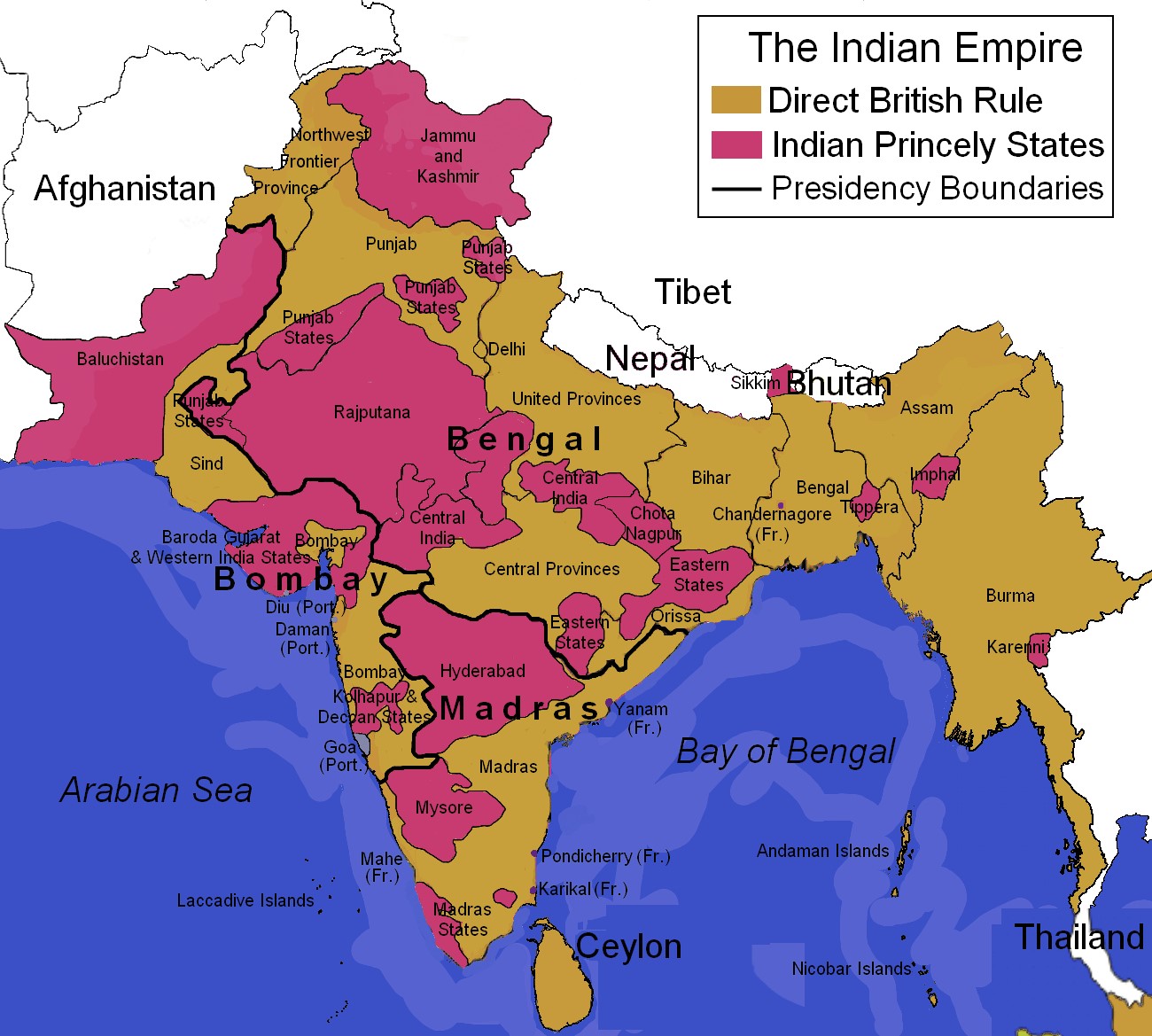 The main difference is that the Mughal area stretched northwest towards Kabul, while the British Empire expanded towards Burma. The map of British rule also shows that colonization had only taken place in the brown-colored areas. The territories referred to as ‘Indian Princely States’ were ruled by Indian kings and rulers with various other titles. This administrative fragmentation was even greater during the Mughal period because the population and the economy were less developed at that time.

In short, if India did not exist and Southeast Asia back then consisted of a large collection of scattered autonomous communities, who was internal and who was external? And how can you claim that the Mughals, who were themselves very diverse, had invaded India? There was no India as an administrative unit or as a nation. The area in question, a trimmed version of which is still known as Southeast Asia, was and still is very heterogeneous.

A second problem with the Hindu-Muslim opposition, which in the Hindutva version coincides with Hindus and Mughals, is the assumption that before the settlement of the Mughals there were no Muslims living in Southeast Asia. This testifies to a striking lack of historical knowledge. More than three centuries since the year 1200, so long before our friend Christopher Columbus supposedly discovered America, there has been a powerful Delhi Sultanate that has known several dynasties and whose territory extended to large parts of present-day India, Pakistan, Bangladesh and Nepal. These Muslims also came into conflict with the Mughals and have long held out against the new rulers. It is good to emphasize this: every ruler was a stranger because India as a country did not exist. So a ruler from Rajasthan who went south was a stranger, just as a ruler from Maratha who went to Delhi was also a stranger there. The major conflicts in Southeast Asia were not religious, but economic, military and political.

A third misunderstanding is the idea that India has always been a land of Hindus. In my opinion, this impression was mainly created by the idea that the Hindu fundamentalist works such as the Vedas were written centuries before the Christian era. Although there is much mysticism and mystery surrounding Hindu scriptures, this argument is untenable. The existence of religious or political texts does not mean that an entire population adheres to that religion or political ideology. This applies to all the major religions that have taken centuries to win over a population. This was partly due to the lack of infrastructure, the low literacy of the population and the low development of means of communication.

Moreover, religious scholars, both in India and abroad, agree that there was no Hinduism. This term was introduced by the English to describe the large collection of religious cultures. It was not a term that the inhabitants of Southeast Asia themselves used. The only thing that the multitude of religions had in common was, as one colleague put it, that they all originated in the foundation of present-day India. Later, religious reformers attempted to reinterpret diversity as a trinity (Brahma-Vishnu and Shiva) or as a monotheistic religion (the Arya Samaj) following the Christian model of the God the Father, the Son and the Holy Spirit. But this philosophical intervention has not affected the wide variety of religious practices.

In summary, long before the arrival of the Mughals, there were Islamic empires in India that, like other rulers in the subcontinent, resisted the Mughals. The population of Southeast Asia was very diverse and there was no political-administrative connection that you could call ‘India’. Thus, the claim that the Mughals invaded India has become untenable. A second claim is that the Mughals oppressed the Hindu population of India for centuries. This Muslim-Hindu contradiction no longer seems to apply when you consider that long before the settlement of the Mughals in Southeast Asia, the subcontinent was already populated by large numbers of Muslims who also suffered from the Mughals. So not only the Hindus consisted of different religions, also the Muslims consisted of different cultures that sometimes fought each other and did not form a unity. The religious practices of the population were very different. So if there was no India, the different religious communities were religiously and culturally heterogeneous, the Muslims existed in different variations and cultures, and the English had not yet invented “Hindus,” who invaded what?