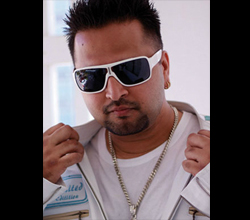 Biografie
With a blend of dancehall, reggae and soca in his voice, Mr. Z is one of Europe’s hottest, if not the hottest, most promising caribbean entertainers that is jammin the scene right now. A true Ambassador for world music.With indian-surinam-trinadian and guyanese blood he is a true representative for the west-indian and caribbean community.

Growing up with bollywood films and music and messing around with his father’s record collection he started playing the drums at the age of 9. He found a tape from one of his uncle’s with on one side “Bob Marley” and onthe other side “The Mighty Sparrow” and a lot of other soca and calypso artists, and ever since then, he was hooked on every riddim from the caribbean.While practicing on his drum-kit he started singing along at the same time and people around him were impressed by his singing and his groove for riddim. At the age of 14 he went to a lot of jam sessions, and it was at one of these sessions that another drummer came along, and so he took the mic and saw the people dancing while he was singing, and the entertainer in him grew. Ever since then he started jammin the mic more and more and traded his drum sticks for the mic. Mr. Z started writing his lyrics and kept it to himself, and never showed it to anybody. Until he met a producer by the name of Brad Grobler in 1994, from South Africa. Alongside his younger brother Nauwshaad they started a production team called BOOTYKILLERZ and recorded all his tracks that he had written so far in their little home studios, but with a massive sound!!

Mr. Z listened, and was inspired by artists such as Michael Jackson – The Beatles – Elvis Presley – Super Cat – Bob Marley – Peter Tosh – Jimmy Cliff- Shabba Ranks – Chaka Demus & Pliers – Sly & Robby – Beenie Man – Red Rat -Sean Paul – Apache Indian -Shaggy-Buju Banton – Maxi Priest- T.O.K. –Mighty Sparrow-Byron lee-Machel Montano and many more caribbean artists, and went to see a lot of the shows and learned from all these big names. Now he is busy recording his debut album with the bootykillerz team. So you know that this album was in the making since he was 9 years old. Mr. Z is taking his time and making music HIS WAY and OUT OF THE BOX, you can’t put good music in a box especially when you have 3 styles in 1 voice!! For the vibes and inspiration of this album he went to party in Trinidad & Tobago – Guyana – Surinam and New York , cause almost all the tracks on this album come straight from the dance floor were the crowd anda dj decide what a party is!

In 2004, Mr. Z released his debut single “Bootykiller” that went on to become an international club hit, and brought him a strong underground reputation.On the strength of that single Mr. Z toured in SouthAmerica, Asia and Europe. Mr. Z has performed on the stage of very large festivals such as Noorderslag and Parkpop. He has alsoperformed in the Ministry of Sound in Taipei (Taiwan),Brazil, Turkey, Spain, Marocco,Surinam, Miami and France, but to mention a few.In 2005 his second single COUNT 2 SIX was released in France by SCORPIO music and reached the #27 position in the FRENCH TOP40 without a supporting video, and became a top 5 urban smash hit in several dj charts in France and even become a #1 hit in Greece. In 2006 UNDERGROUND RECORDS TAIWAN signed Mr.Z to release his Album NUFF SAID in Taiwan and China and the Asian release is a fact! Also in that year he released his next single EARTH ANGEL which became his first NR.1 hit in the X-CHART (Hollands Official Urban Chart) and blazed that topposition for 7 weeks!! The supporting video of EARTH ANGEL entered THE BOXVIDEO CHART and THE BOX REGGAE CHART @ NR.1, wich led him to become a household name in the DutchUrban Scene!!!! Also he collaborated with dutch platinum act The Sunclub ( Summerjam ) on 3singles wich led straight to the top 40, and voicin on tracks of big Dutch DJ’s such as Dj Hardwell,Vato Gonzales, Steff Da Campo and Luc le Blanc.Between 2004 and 2007 Mr. Z was signed to dutch independent label Digidance, but due to industry madness they went bankrupt and they had toend Mr.Z’s contract wich was a sad thing to do for both parties, cause Z was doing very well and his name was getting bigger in Europe, it is Digidance that believed in him and signed him for his uniqueflow, tracks and entertainment skills , It was Digidance that ignited that Faya!

So Mr. Z got more energy than ever and took matters in to his own hands. Mr. Z dove into studios with more tracks for this album than the Asian release. With all the things happened in the past he didn’t want to name his debutalbum “Nuff Said” anymore ,and started with new and positive energy, so when it hits the Dutch/European and World stores it will have a new name!!! In 2008 he starts off with his new and massive BIGTUNE HYPNOTIZE, which is a Dancehall/Soca track that puts dancefloors worldwide in a MR.Z frenzy, a topnotch floorfiller that’s been getting a lot of international attention till this day and is one of the crowd’s favourite tunes when he hit the stage. Doing the video by himself and setting up his own Record label 330MUSIC he’s more and more in controle from the productions to the promotion, with the same team and some next generation kids.

Now in 2011 he’s ready to drop that West-Indian vibe all over the world with his new album THE REBEL-THE SHOW-THE MADNESS!!! Shooting 2 supporting video’s in Miami for this album on his own label 330MUSIC, Mr.Z’s buzz is about to ignite all over the planet!! The tracks of Mr.Z are floorfillers of the highest level which are in the playlist of the best dj’s worldwide. As soon as the first beats blow from the speakers on to the dancefloor the crowd goes crazy and the ladies go first. Dancehall madness and caribbean energy from The Netherlands unpresedentley international, the underdog, but large export!!!! What is not able beside the party which Mr.Z builds all over the globe is the international sound, wether it is a solo show or with his live band “THE 330 MADNESS BAND”!! From the first beats they are immediately contagious and before you know it you are in the heart of the caribbean. Energetic dancehall and caribbean music in the style of international superstars like: Shaggy, Sean Paul, Rupee, etc etc!!! Mr.Z has a huge buzz and the army of fans worldwide are getting bigger and bigger. With his voice and stage experience he is ready to release all of his work to the world stage. This is the dancefloor prophecy, so shall it be written and so shall we dance….PEOPLE ARE YOU READY FOR THE MADNESS!!!!